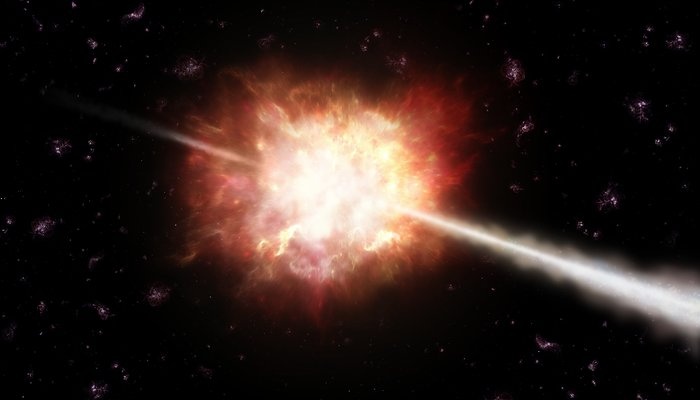 After a decade-long search, scientists working at the Landessternwarte, ZAH together with their colleagues in the H.E.S.S. collaboration have for the first time detected a gamma-ray burst in very-high-energy gamma light. This discovery was made in July 2018 by the H.E.S.S. collaboration using the huge 28-m telescope of the H.E.S.S. array in Namibia. Surprisingly, this Gamma-ray burst, an extremely energetic flash following a cosmological cataclysm, was found to emit very-high-energy gamma-rays long after the initial explosion.

The observatory at Königstuhl was inaugurated on 20th June 1898 by the grand duke Friedrich I. of Baden.

Since January 1, 2005, the Landessternwarte Königstuhl (LSW) - together with the Astronomisches Rechen-Institut (ARI) and the Institut für Theoretische Astrophysik (ITA) - is part of the Zentrum für Astronomie (ZAH) of Heidelberg University.

The contemporary Landessternwarte Königstuhl (LSW) is active in the fields of stellar and extragalactic astrophysics. It is involved in the development and building of the Lucifer-spectrograph for the near infrared at the Large Binocular Telescope. In the domain of high-energy astrophysics the LSW participates in the H.E.S.S.-telescope in Namibia. Special emphasis is taken on active galaxies and quasars, a field of research which is also supported by optical observations. The stellar astrophysics groups at LSW are concerned with cool and hot stars as well as with wide-angle sky surveys for the oldest stars in the Milky Way. The technique of interferometry is developed for ESO telescopes (VLTI) and used especially for the search of extra-solar planets.

If you have comments on this page, contact the webmaster. Other mails should be addressed to the postmaster.